This country is so vast, with such contrasting landscapes; its impossible to see everything. Ranging from the cosmopolitan bustle of Buenos Aires to the tropical jungles and pounding falls of Iguazú or the thunderous splash of icebergs in Los Glaciares National Park, it is a fascinating destination even for the most jaded seen-it-all travellers. 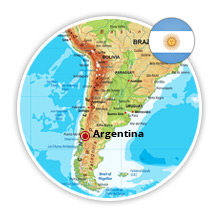 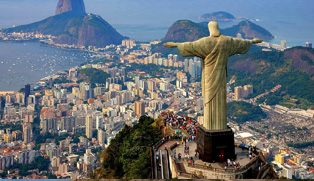 Patagonia: Journey to the End of the World
13 days 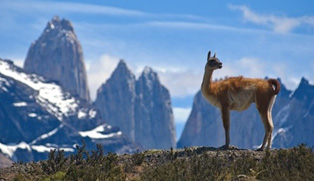 13 days from Santiago to Buenos Aires

Patagonia: Journey to the End of the World - 13 Days

Globus family of brands : 13 days from Santiago to Buenos Aires

The Best of Brazil & Argentina
9 days 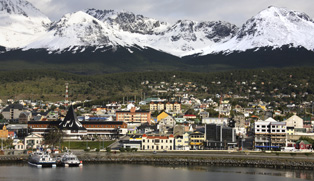 The Best of Brazil & Argentina - 9 Days

This country is so vast, with such contrasting landscapes; it's impossible to see everything. Ranging from the cosmopolitan bustle of Buenos Aires to the tropical jungles and pounding falls of Iguazú or the thunderous splash of icebergs in Los Glaciares National Park, it is a fascinating destination even for the most jaded seen-it-all travellers. Be it the fertile plains of the Pampas or the stunning beauty of Patagonia. Its overwhelming natural beauty combined with its sophistication, romanticism and joy for living gets hold of you and refuses to let go! Whether you've come to meander the quiet towns of the Lake District or tango the night away in a smoky, low-lit Argentine tango bar, your trip to the Southern Hemisphere won't disappoint.

Argentina has wildly varied climates and its location below the equator also reverses the placement of seasons from the order in the northern hemisphere. Each of the country's diverse geographic regions has its own ideal tourist season. In general, the summer is from December through February, followed by fall in March through May, winter from June through August and spring in September, October and November. The best time to visit Buenos Aires is ideal in fall and spring. The beaches and resort towns are packed with vacationing Argentines in summer. Mendoza, Córdoba and the Lake District are all spectacular in fall. The leaves put on an epic display, temperatures are comfortable and the crowds are thin. Summer is the best time to hit Patagonia, when the weather’s milder and more services are available. Northern Argentina and Iguazú is best visited in winter. The rains and heat have subsided. Spring is also pleasant, as temperatures are mild and the crowds have cleared out. Ski season runs mid-June through mid-October.

Visit the Argentinian side of the Iguazu Falls. One of the most popular things to see in South America, the Iguazu Falls are truly spectacular. This natural wonder is twice as wide as Niagara and is taller, as well. It is situated on the border of Argentina and Brazil making it quite an exotic location to visit. There is said to be more than 275 waterfalls that cascade throughout the national parks. On the Argentine side you can walk up to the heart of the Devil’s Throat. You can also take a boat ride into the falls themselves on the Argentina side.

Glaciar Perito Moreno. Among the Earth’s most dynamic and accessible ice fields, Glaciar Perito Moreno is the stunning centrepiece of the southern sector of Parque Nacional Los Glaciares. Witness nature’s genius, a symphony of the whitest whites and bluest blues, of miniature ice storms and groaning, heaving cliffs of water. Locally referred to as Glaciar Moreno, it measures 30km long, 5km wide and 60m high, but what makes it exceptional in the world of ice is its constant advance – up to 2m per day, causing building-sized icebergs to calve from its face. As you ascend the glacier, be prepared to be blown away by the sheer beauty of the glacier. Intricate icescape of ridges and crevasses, crystalline white peaks that plunge into glowing blue valleys, waterfalls of the purest water feeding the sinkholes, ice caves that emerge onto grand frozen fields and pools of otherworldly blue.

Go on a wine tour in the Mendoza wine region. The Mendoza wine region is considered the heart of the winemaking industry in Argentina. Located in the eastern foothills of the Andes vineyards are planted at the some of the highest altitudes in the world. If wine is not your poison, you can still visit Mendoza to go rafting, skiing or do other adventure activities, taking advantage of the nearby Andes.

A bit offbeat, visit Quebrada de Humahuaca in the Province of Jujuy. A ravine 150 km long, it is located not far from Argentina’s border with its northern neighbour, Bolivia. It is spectacular due to its rock formations and its incredible multi-coloured hills, which truly must be seen to be believed.

Visit the UNESCO World Heritage site Península Valdés. It is of South America’s finest wildlife reserves. A total area of 3600 sq km, it has more than 400km of coastline. The wildlife viewing is truly exceptional. The peninsula is home to sea lions, elephant seals, guanacos, rheas, Magellanic penguins and numerous seabirds. But the biggest attraction is the endangered southern right whale.

Visit Tierra del Fuego. A triangular archipelago surrounded by the stormy South Atlantic and the Strait of Magellan, Tierra del Fuego offers plenty of natural beauty: scenic glaciers, lush forests, astounding mountains, clear waterways and a dramatic sea coast. Maybe it’s the austral light, or just knowing that the next step south is Antarctica. Whatever it is, this trove of mystical islands, cut off from the northern world by the Strait of Magellan, is indescribably magical. Travellers flock here to glimpse the furthest reaches of the continent, and ah – what a view it is! The main gateway to wondrous Antarctica, the barren northern plains of Tierra del Fuego give way to peat bogs and moss-draped lenga forests that rise into ragged snowy mountains.

Make a trip to the Cementerio de la Recoleta in Buenos Ares. Wander for hours in this amazing cemetery where ‘streets’ are lined with impressive statues and marble sarcophagi. Crypts hold the remains of the city’s elite: past presidents, military heroes, influential politicians and the rich and famous. Hunt down Evita’s grave.

Argentina is famous for its quality beef. While in Argentina, bid farewell to your diet and gorge on the abundance of meat available everywhere here. Whether you’re dining on prime cuts in a swanky Buenos Aires parrilla or digging into a sizzling tabletop grill of chewy, flavourful, close-to-the-bone cuts in a family-style eatery, get your fill of Argentina’s most famous food.