There are few places in the world with the grandeur and breathtaking beauty as of Alaska. Big, beautiful and wildly bountiful, the final frontier is a dream destination for many travelers, an untamed wonderland with an abundance of things to do. 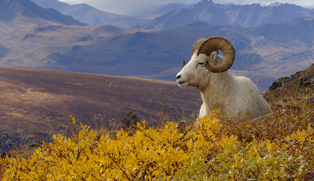 7 days from Fairbanks to Anchorage

Globus family of brands : 7 days from Fairbanks to Anchorage 10 days from Anchorage to Anchorage

Globus family of brands : 10 days from Anchorage to Anchorage 13 days from Anchorage to Anchorage

Globus family of brands : 13 days from Anchorage to Anchorage

There are few places in the world with the grandeur and breathtaking beauty of Alaska. Big, beautiful and wildly bountiful, the final frontier is a dream destination for many travelers, an untamed wonderland with an abundance of things to do. Traveling in Alaska is like traveling no other place on earth. There are 586,000 square miles here, and almost that many possibilities. In Alaska, you can catch sight of crashing glaciers, reel in a record-breaking halibut, conquer the largest mountain in North America, or try to cash in while panning for gold. No other place promises such easy and overwhelming immersion in the wild world.

Alaska is a unique experience whatever time of year you choose to visit, but it has the most to offer in summer or late winter. The “best” time really depends on what you want to do in Alaska. Most visitors visit Alaska from mid-May to mid-September, with the peak season from June 15th to August 15th. The peak period offers the most tour options, the best weather and the best wildlife viewing opportunities.
May is a good time to get great discounts and avoid crowds as the tourist season is just starting. It is during May that the temperature starts to warm up as the month progresses. The time periods prior to Memorial day and after Labor day are considered the “shoulder” season which translates to less crowds and more opportunities for discounts. But be warned that since it’s still early season for summer to set in, there may be places where the snow has yet to melt.
June is the driest time of the year and the days offer more daylight hours. In fact June 21st is the longest day of the year. Nature is in full bloom and the tourist season is underway. June is the best month to see Alaska.
July is the warmest month of the year and thus the peak season time. August onwards the temperature starts cooling and the tourist circuits starts winding down slowly till mid-September after which they completely shut down for the season. Winters are quite harsh and cold. But those who are into winter sports and Northern Lights spotting can visit Alaska late February and March, which offers more daylight and less extreme temperatures.

Go on a wildlife spotting tour at Denali National Park. Set on a massive area larger than the state of Massachusetts, Denali National Park is most famous as the site of Mt. McKinley, the largest mountain in North America. Well known for its diversity of wildlife, it is not uncommon to spot grizzly bears, caribou, moose and Dall sheep when visiting the park. Black bears and wolves are occasionally seen, although the wolverine has proven to be much more elusive. And if luck favours you, catch a sight of the majestic peak of Mt. McKinley.

Go wine tasting in Alaska! Surprised? Well you should be as Alaska is known for its scarcity of vineyards. Bear Creek Winery in Homer is an impressive family-run operation, which bottles some fine berry-based wines, plus fireweed mead and rhubarb vino. They conduct tasting tour of the winery in summers.

Learn about the 7500 year old heritage of Kodiak’s indigenous people - Alutiiq people, at the Alutiiq Museum & Archaeological Repository. The exhibits display one of the largest collections of Alutiiq artefacts in the state, ranging from a kayaker in his waterproof parka of seal gut to a 19th-century spruce-root hat.

Visit the Ulu Knife Factory at Anchorage. See the uniquely Alaskan knife used by the native people for hunting, fishing, filleting and more!

Ride the Rails of the Historic Alaska Railroad. One of the best ways to get to know Alaska is by train. With wide windows and domed ceilings, the passenger cars on the Alaska Railroad fill up during summer months. Routes stretch between Seward to Fairbanks, running through Anchorage, Denali and Fairbanks with offshoots to Whittier and Palmer. One of the most unique routes is along "Hurricane Turn," the area between Talkeetna and the Hurricane area that has no roads.

Do not miss out a chance at trying your hand at fishing. A dream destination for fishermen, Alaska has 21 recognized species of sport fish that draw anglers from all around the world. The rivers teem with salmon, halibut, rainbow trout and other sport fish. But you need to apply for a fishing license if you plan on fishing.

See the mystical dance of lights in the sky. Also known as the 'Northern Lights,' the aurora borealis are dancing, natural displays of colour that light up the sky in polar regions. The phenomenon is most visible in March and September, when skies are clear and the weather is mild. The best time to keep your eye on the skies is roughly an hour and a half after sunset.

Strike it rich at Alaska. Alaska's hills and streams still glimmer with gold and it takes only a little effort on your part to find it. One of the best places to start is in Fairbanks, where the gold rush began, although panning can be done just about anywhere, including the beach east of Nome and in places along the Dalton Highway.

Go Glacier spotting in Alaska. Here, particularly in Southcentral Alaska, glaciers dot the map, dazzling natural history buffs, challenging adventurers, amazing photographers, and wowing folks who simply enjoy watching massive chunks of ice calve and crash to Earth. Reach out and touch, some you can walk on or climb across and some you want to observe from a very safe distance. Take your pick from various Glacier spotting options – Glacier cruise, Glacier by air or a more unique experience – Glacier by train. The Alaskan railroad is the only way to reach Spencer Glacier in summers.

One of the lesser-known things to do in Alaska is to pay a visit to Barrow, the northernmost city in the United States. A tiny town of less than 5,000 people, it is only accessible by plane. Barrow is blanketed in complete darkness between 50 and 70 days every year, and then the sun shines and never sets from May to early August. Besides being able to boast visiting the true "end of the earth," while in Barrow you can visit the Pigniq archaeological site, where 16 dwelling mounds from a culture that existed from 500-900 AD. Sit, catch sight of aurora borealis during the dark season, and witness the traditions of both whaling and dog sledding.